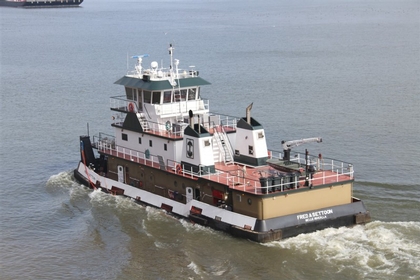 Pictured as: the Fred A. Settoon (Settoon Towing) Photo by: Captain Ted

Built in 2011, by the Eastern Shipbuilding Group Incorporated of Panama City, Florida (hull #172) as the Fred E. Settoon for Settoon Towing Incorporated of of Pierre Part, Louisiana.

In 2017, the tug was acquired by Savage Marine Services Incorporated of Salt Lake City, Utah. Where she was renamed as the Savage Vision.

In 2020, Savage Marine Services Incorporated was acquired by the Kirby Corporation of Channelview, Texas. Where the tug was renamed as the Green Wing.

Powered by two, Tier II compliant, Caterpillar 3512C diesel engines. With Twin Disc reduction gears, at a ratio of 4.03:1. She is a twin screw towboat, rated at 2,600 horsepower.