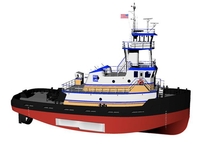 Rendered as: the Shelby Withington Conceptual rendering courtesy of: Entech and Associates


Back to NORFOLK TUG COMPANY INCORPORATED