Built in 1983, by McDermott Shipyard of Amelia, Louisiana (hull #273) as the Jaramac 62 for the J. Ray McDermott Company of Houston, Texas.

In 1993, the tug was acquired by Tidewater Marine Incorporated of New Orleans, Louisiana. Where she was renamed as the Mac Tide 62.

In 2004, she was acquired by Hornbeck Offshore Transportation of Covington, Louisiana. Where the tug was renamed as the Freedom Service.

In 2013, Hornbeck Offshore Transportation's tug division was acquired by the Genesis Marine Company of Houston, Texas. Where the tug retained her name.

The tug's towing equipment consists of a double drum, INTERcon DD-225/82155, side by side, towing winch. Equipped with 3,500(ft) of 2(in) diameter stainless steel towing cable on each drum.
(Captain Eric Takakjian, Bryan Hammond) 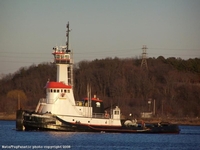