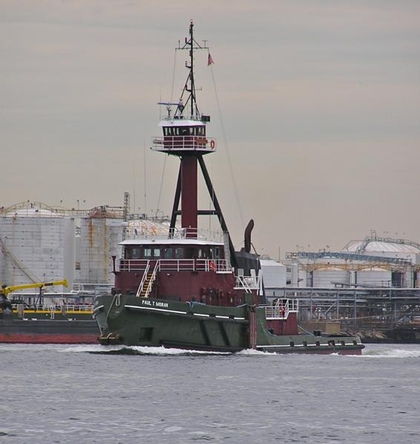 Pictured as: the Paul T. Moran (Moran Towing) Photo by: Will Van Dorp

Built in 1975, by Equitable Equipment of Madisonville, Louisiana (hull #1652) as the Eliska Theriot for Nolty J. Theriot Offshore of Golden Meadow, Louisiana.

In 1988, the tug was acquired by the Exxon Shipping Company of Wilmington, Delaware. Where the tug was renamed as the Exxon Golden State.

In 1993, in the wake of the Exxon Valdez incident. The Exxon Shipping Company was rebranded as the SeaRiver Maritime Company of Houston, Texas. Where the tug was renamed as the S/R Golden State.

In 1998, the tug was acquired by the American Steamship Company of New York, New York. Where she was renamed as the Ocean Venture.

In 1998, the American Steamship Company outfitted the tug Bludworth coupler system. And, mated her with a large bulk barge. The tug and the barge worked primarily in the Gulf of Mexico. Although, the unit completed two trips to Russia with loads of grain.

In 2003, she was acquired by the Moran Towing Corporation of New Canaan, Connecticut. Where she was renamed as the Paul T. Moran.

However, her bulk barge was scrapped as "unsalvageable." The Paul T. Moran was the first articulated tug and barge placed in service for the Moran Towing Corporation

In 2020, the unit was acquired by an undisclosed buyer.

Her electrical service is provided by two 99kW generator sets. The tug's capacities are 212,394 gallons of fuel.

Her barge was built in 1981, by the General Dynamics Corporation of Quincy Massachusetts (hull #75) as the Amoco Georgia for Amoco Shipping Incorporated of Wilmington, Delaware. Although in 1987, it was renamed as the Georgia Bay.

In 1997, the barge was acquired by the Moran Towing Corporation of New York, New York. Where it was renamed as the Massachusetts. And in 2005, the barge was modified to receive a Bludworth coupler system. The coupling unit required a redesigning of the notch, as well as a new skeg arrangement. A second hull was also added to the the barge. Work was completed by Gulf Marine Repair of Tampa, Florida. She measures 430(ft), with a capacity of 137,000 bbls.
(Robert Silva, Robert P. Hill) 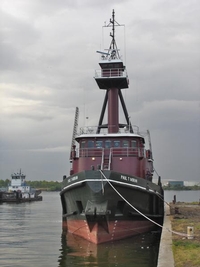 
Back to SEARIVER MARITIME COMPANY INCORPORATED