In 1998, the tug was acquired by the SeaCoast Transportation Company of Seattle, Washington. Where she was renamed as the Pacific Avenger.

In 2007, the SeaCoast Transportation Company was acquired by K-Sea Transportation Partnership Incorporated of East Brunswick, New Jersey. Where the tug retained her name.

In 2016, she was phased out of service. And, was "laid up" at the Kirby Corporation's facilities at Lake Union in Seattle, Washington.

Her electrical service was provided by two, 99kW generator sets. The tug's capacities were 128,888 gallons of fuel. 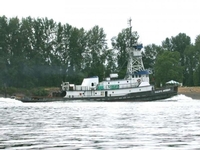