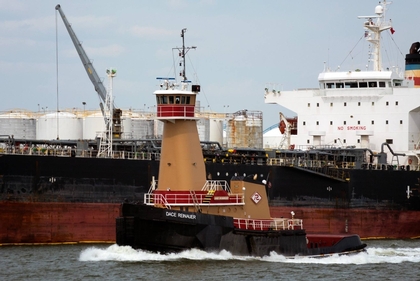 Built in 1968, by Main Iron Works Incorporated of Houma, Lousiana (hull #196) as the Scott Chotin Jr. for the Chotin Transportation Company of New Orleans, Louisiana.

In 1982, the tug was acquired by the Reinauer Transportation Companies of Staten Island, New York. Where she was renamed as the Dace Reinauer.

In 2008, the tug was outfitted with a JAK-400 coupler system. The project required a large amount of the steel in her bow to be replaced. As well as the basic design of her bow was altered to accommodate the load boxes for coupler system, that would affix the tug to notch of the barge.

The existing wheelhouses were removed, and the tug was fitted with a single aluminum wheelhouse, with a 43(ft) height of eye. The towing winch was removed, the tug's raised bow, and 02 deck was extended aft 10(ft) to add counter weight for increased stability. As well as, to create additional space below decks to accommodate a third service generator, and additional air compressor dedicated to her JAK coupler system. The work was performed at Feeney's Enterprise of Kingston, New York. The engineering of the refit was performed by JMS Naval Architects.

In 2015, the tug was repowered with two, MTU/DDC 16v4000 diesel engines. Her stern was enclosed to add reserve buoyancy, her flanking rudders were removed, and the tug was fitted with new stacks.

In 2021, she was placed out of active service and was "laid up" at Reinauer Transportation's yard at Port Richmond in Staten Island, New York, 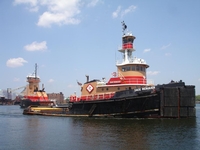 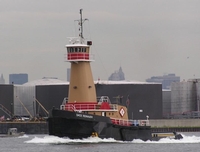 Pictured as: the Dace Reinauer (Reinauer Transportation Companies) Photo by: Will Van Dorp

Pictured as: the Dace Reinauer (Reinauer Transportation Companies) Photo by: Will Van Dorp


Back to CHOTIN TRANSPORTATION COMPANY INCORPORATED