Outfitted with an INTERcon coupler system. The Eliza is "married" with the 442(ft), by 72(ft) by 36(ft), double hulled, 115,000(bbl) barge, the Atlantic. That was constructed simultaneously in 1995. By Alabama Shipyard Incorporated of Mobile, Alabama for Penn Maritime Incorporated. 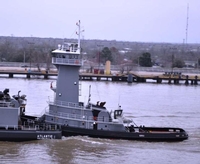 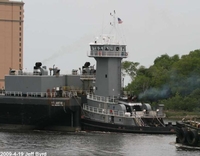