PENN NO. 4
Photo by: Peter Codd

In 1981, the tug was transferred to the Apex Oil Company of St. Louis, Missouri. Where she was renamed as the Inca.

In 1988, the tug was acquired by the Morania Oil Tanker Corporation of Staten Island, New York. Where she was renamed as the Morania No. 4.

In 2000, the Morania Oil Tanker Corporation merged with Penn Maritime Incorporated of Stamford, Connecticut. Where the tug was renamed as the Penn No. 4.

In 2013, the tug was outfitted with a JAK-400 coupler system at Feeney's Enterprises in Kingston, New York.

In 2016, she was phased out of active service, And was "laid up" at the Kirby Corporation's yard in Staten Island, New York.

In 2018, the tug was acquired by Curtin Maritime Incorporated of Long Beach, California. Where she retained her name. And the tug was "laid up" at Therodore, Alabama. 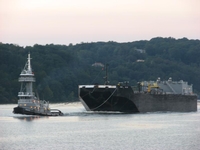