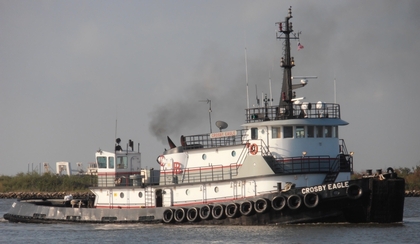 In 1994, the tug was acquired by the Dann Ocean Towing Company of Tampa, Florida. Where she was renamed as the Allie B.

In 2006, she was acquired by the Crosby Marine Transportation Company of Golden Meadow, Louisiana. Where the tug was renamed as the Crosby Eagle.

In 2015, the tug was phased out of active service and was "laid up" at Berwick, Louisiana.

Powered by two, Cummins KTA 50 diesel engines. With Lufkin reduction gears, at a ratio of 6:1. Turning two, 79(in) by 89(in), four bladed, fixed pitch, stainless steel propellers, mounted in kort nozzles, for a rated 6,000 horsepower.

The tug's towing gear consisted of a double drum, side by side, Markey TDSD 28, towing winch. Outfitted with 2,000(ft) of 2(in) towing wire on each drum. 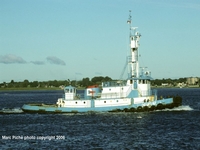