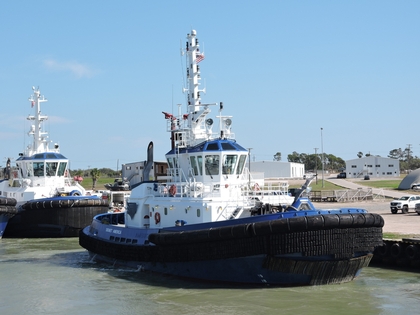 Built in 2008, by J.M. Martinac Shipbuilding Incorporated of Tacoma, Washington (hull #246) as the Signet America for the Signet Maritime Corporation of Houston, Texas.

Primarily a limiting draft of 17(ft) 6(in) for operations in the La Quinta Channel in the port of Corpus Christi, Texas. In which the tug was intended operate. She was originally conceived to not only perform conventional ship handling, escort work, oil rig handling, and short haul coastal towing.

In 2008, she was chartered by the Foss Maritime Company of Seattle, Washington. Where she was renamed as the America.

In 2018, the tug was returned to the Signet Maritime Corporation of Houston, Texas. Where she was renamed as the Signet America.

Pictured as: the America (Foss Maritime Company) Photo by: Foggy

Pictured as: the America (Foss Marine Holdings) Photo by: Foggy