Built in 2001, by Thoma-Sea Boatbuilders Incorporated of Houma, Louisiana (hull #118) as the M-2 for the Massie Towing Company of Bourg, Louisiana.

In 2011, the tug was acquired by the Crosby Marine Transportation Company of Golden Meadow, Louisiana. Where she was renamed as the Crosby Skipper.

In 2014, she was acquired by the Dann Ocean Towing Company of Tampa, Florida. Where the tug was renamed as the Captain Willie Landers.

Her electrical service is provided by two, 65kW, Stamford generator sets. Driven by two, Caterpillar 3304 diesel engines. The tug's capacities are 49,000 gallons of fuel oil, and 4,000 gallons of potable water. 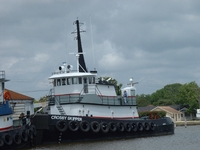