Built in 1964, by the Burton Shipyard Incorporated of Port Arthur, Texas (hull #351) as the El Lobo Grande for Tidewater Marine Services Incorporated of New Orleans, Louisiana.

In 1990, the tug was sold. Where she was renamed as the Avenger.

In 2005, she was acquired by Harbor Docking and Towing Company of Westlake, Louisiana. Where she was renamed as the Mr. Carl.

In 2009, the Harbor Docking and Towing Company renamed the tug as the Carl.

In 2014, she went out of documentation. Her current, and or final disposition is unknown. She was a twin screw tug, rated at 2,400 horsepower. 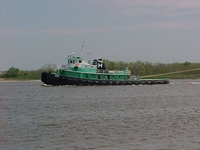