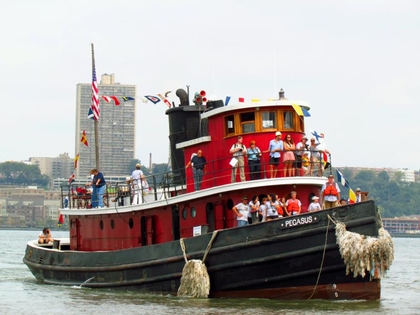 Pictured as: the Pegasus (Pegasus Preservation) Photo by: Birk Thomas

Built in 1907, by the Skinner Shipbuilding Yard of Baltimore, Maryland as the S.O. Co. No. 16 for the Standard Oil Company of New York, New York.

The tug was one of a series of four sister tugs designed to serve waterside refineries and terminals owned by the Standard Oil Company. Docking ships, moving lighter barges of petroleum products, and serving as auxiliary fire boats when needed.

In 1915, the marine department of the company was reorganized as the Standard Transportation Company of New York, New York. Where the tug was renamed as the S.T. Co. No. 16.

In 1953, the Socony Mobil Oil Company Incorporated became the Esso Shipping Company of Wilmington, Delaware. Where the tug was renamed as the Esso Tug No. 1.

The name change reflected company reorganizations mandated by the Federal Government under the Sherman Anti-trust Act of 1890, and the Hepburn Act of 1906. Which expanded government jurisdiction over oil production and shipment.

In 1955, the McAllister Brothers Towing Company renamed the tug as the John E. McAllister. The company also repowered the tug with a modern General Motors diesel engine, rated at 900 horsepower.

In 1987, the tug was acquired Pamela Hepburn of Hepburn Marine Incorporated of New York, New York. Where the tug was renamed as the Pegasus. She was brought back to New York where she engaged in general harbor towing, oil barges, contractor rigs and barges. As well as, railroad carfloats.

In 2021, the tug was scrapped at Staten Island, New York. 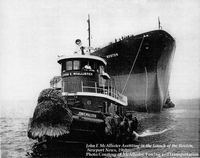 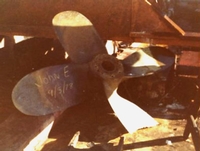