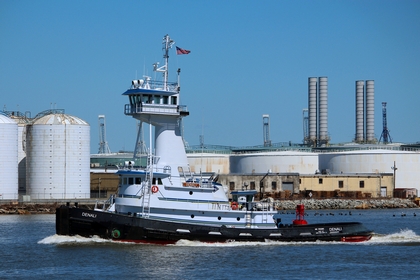 Built in 2010, by Main Iron Works Incorporated of Houma, Louisiana (hull #427) as the Anna G. for the Belle Pass Towing Company of Golden Meadow, Louisiana.

In 2013, the Belle Pass Towing Company was acquired by the Crosby Marine Transportation Company of Golden Meadow, Louisiana. Where the tug was renamed as the Crosby Skipper.

In 2016, the tug was acquired by the Kirby Corporation of Channelview, Texas. Where she was renamed as the Denali.

In 2016, the Kirby Corporation outfitted the tug with a JAK-400 coupler system, removed her towing equipment. As well as fitting the tug with an upper wheelhouse.

Powered by two, Caterpillar 3516C-HD diesel engines. With Hayley reduction gears, at a ratio of 7.8:1. Turning two, 108(in) by 108(in), four bladed, stainless steel, fixed pitch, propellers, mounted in kort nozzles. For a rated 5,000 horsepower. 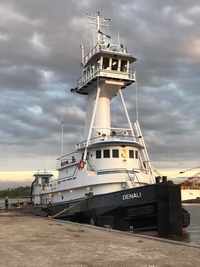