Built in 1981, by Modern Marine Power Incorporated of Houma, Louisiana (hull #37) as the Morania No. 22 for the Morania Oil Tanker Corporation of Staten Island, New York.

In 1986, she was chartered to the Mobil Oil Company of New York, New York. Where she was renamed as the Mobil 3.

In 1991, in the wake of the Exxon Valdez incident. In an effort to remove the oil company's physical names from the vessel's names. The Mobil Oil Corporation renamed the tug as the Tamaha.

In 1994, she was returned to the Morania Oil Tanker Corporation of Staten Island, New York. Where the tug was renamed as the Morania No. 3.

In 1998, the tug was acquired by Penn Maritime Incorporated of Stamford, Connecticut. Where she was renamed as the Amberjack.

In 1998, along with the barge Biscayne. The tug was fitted with a Bludworth coupler system. The project was engineered by Ocean Tug and Barge Engineering of Milford, Massachusetts. Due to the relatively shallow notch of the barge. A skeg arrangement was specifically designed to effectively lengthen the notch allow for the installation of a Bludworth system. The skeg extensions were engineered, and fabricated for the barge. To lengthen the barge's notch to 25(ft).

In 2000, the Morania Oil Tanker Corporation merged with Penn Maritime Incorporated of Stamford, Connecticut. Where the tug retained her name.

In 2008, when the barge Biscayne was sold. The Amberjack was converted back to a conventional tug, and was fitted with a towing winch. And her bow was reengineered with the removal of the Bludworth coupler system.

In 2018, she was "laid up" at Philadelphia, Pennsylvania.

In 2019, the tug was acquired by Dann Ocean Towing Incorporated of Tampa, Florida. Where she was renamed as the Thomas Dann.


Pictured as: the Morania No. 22 (Mobil Oil Corporation) Photo by: Robert Silva 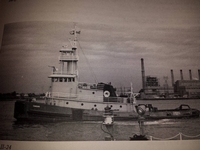 
Back to PENN MARITIME INCORPORATED