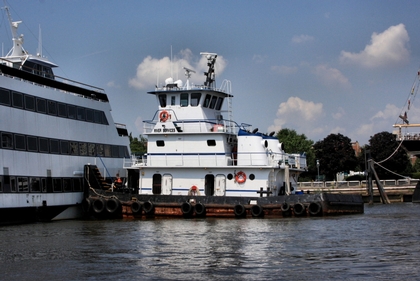 Pictured as: the Penrose (River Services) Photo by: John Curdy

Built in 1981, by the Louis G. Ortis Boat Company, Incorporated of Krotz Springs, Louisiana (hull #115) as the Mr. Shep for the Florida Rock Company of Jacksonville, Florida.

In 2003, the tug was acquired by the BayGulf Trading Corporation of Norfolk, Virginia. Where she was renamed as the Ellen M.

In 2007, she was acquired by K-Sea Transportation Partnership Incorporated of East Brunswick, New Jersey. Where she was renamed as the Scotia Sea.

In 2013, the Kirby Corporation's Philadelphia, Pennsylvania operation. Also known as River Associates Incorporated. Was acquired by the Vane Brothers Company of Baltimore, Maryland Where the tug retained her name.

In 2014, the tug was acquired by the River Services of New Jersey Company of Philadelphia, Pennsylvania. Where she was renamed as the Penrose.

In 2020, the River Services Company was absorbed into Northstar Marine Incorporated of Clermont, New Jersey. Where the tug retained her name.


Back to R.E. PIERSON CONSTRUCTION INCORPORATED