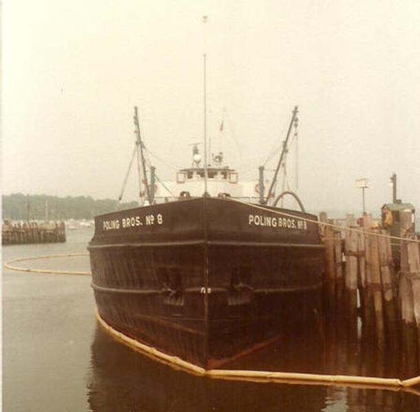 Pictured as: the Poling Bros. No. 8 (Poling) Photo by: Capt. Steve Bernhard

Built in 1924, by the Sun Shipbuilding and Dry Dock Company of Chester, Pennsylvania (hull #74) as the Amsterdam Socony for the Standard Oil Company of New York, New York.

In 1950, she was acquired by the Reinauer Transportation Companies of Staten Island, New York. Where she was renamed as the JoAnne Reinauer.

In 1956, the unit was acquired by the Poling Brothers Transportation Company of New York, New York. Where she was renamed as the Poling Bros. No. 8.

In 1996, she was phased out of service. And, was "laid up" at Mariner's Harbor Staten Island, New York. The unit was scrapped, sometime after the year 2000.
(Jeffery Schurr)


Back to STANDARD OIL COMPANY