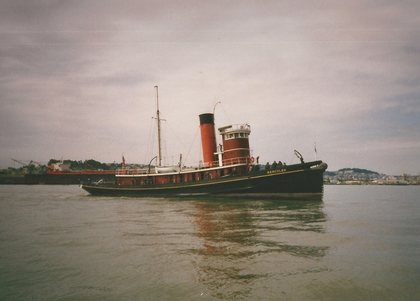 Built in 1907, by John H. Dialogue of Camden, New Jersey (hull #421) as the Hercules for the Shipowners and Merchants Tugboat Company of San Francisco, California.

Constructed simultaneously with the tug Goliah. The two tugs, upon completion were delivered to San Francisco, California, via the Straits of Magellan.

In 1913, the Shipowners and Merchants Tugboat Company was acquired by the Crowley Launch and Tugboat Company of San Francisco, California. Where the tug retained her name.

In 1924, the tug was acquired by the Western Pacific Railroad Company of Oakland, California. Where she retained her name. Where the tug was assigned to shuttling car floats across San Francisco Bay.

In 1947, along with the Monarch, she was contracted to tow the damaged battleship USS Oklahoma from Pearl Harbor, Hawaii to the mainland to be scrapped. In a storm encountered 500 miles from Hawaii, the Oklahoma began to take on water, and sink. The Hercules was able to disconnect her tow line, in time to prevent the tug from being dragged under by the sinking warship.

In 1957, Hercules was replaced in railroad service with the diesel car ferry Las Plumas. And was placed in "reserve" status until 1961.

In 1975, she was acquired by the California State Parks Foundation. And, in 1977, the tug was transferred to the National Park Service for restoration. In 1986, she was designated as a National Historic Landmark. And was placed for exhibit at the San Francisco Maritime National Historic Park.

She was powered by a single vertical, inverted, direct­acting, triple expansion steam engine. With 17(in), 24(in), and 41(in) cylinders. With a 30(in) stroke, constructed for a working pressure of 180(lbs). With Scotch boilers, measuring a 15 (ft) diameter, by 12(ft) in length. Each with four Fox furnaces, and constructed for a working pressure of 180(lbs). The furnaces were arranged for burning oil as fuel. She was a single screw tug, rated 1,000 horsepower.

The air and bilge pumps were connected to the main engine, and the circulating, donkey, fire, and sanitary pumps were independent.
(Kyle Stubbs)