In 1980, the tug was acquired by the Marathon Petroleum Corporation of Findlay, Ohio. Where she was renamed as the Patrica E.

The tug was "married" the tug with the 442(ft), 150,000(bbl), barge. The MM-2 which was constructed in 1982, by Galveston Shipbuilding of Galveston, Texas. For the Marathon Petroleum Corporation of Findlay, Ohio.

In 1998, the Eklof Marine Corporation was acquired by the K-Sea Transportation Partnership Incorporated of East Brunswick, New Jersey. Where the unit retained their names.

On November 10th, 2005 the unit was transiting the Gulf of Mexico when it struck a submerged non-producing platform the West Cameron 229A.

Following Hurricane Rita, the platform's owners. Had located the platform, and had marked it's position with unlit buoys Following the allision, the barge DBL 152 capsized. The tug released the the barge before the capsizing. The DBL 152 she remained afloat while capsized.

The barge was towed upside down into Chikisaw, Alabama. Where the barge was eventually righted. Using a complex system consisting of lifting the hull on air bags, while simultaneously ballasting along, with strategic placing, and attachment of holding power, anchors, and winches. The barge was successfully rotated back into position, at one point taking a 90 degree angle to the water. After her salvage. The DBL 152 was acquired by the Verde Metals Company of Brownsville, Texas. For scrap, salvage, and eventual reuse.

The Rebel returned to service following the incident. And, was outfitted with a JAK-400 coupler system.

In 2016, the tug was phased out of active service. And, she was "laid up," at the Kirby Corporation's yard in Philadelphia, Pennsylvania.

Her electrical service is provided by two, 99kW generator sets. The tug's capacities are 185,541 gallons of fuel. 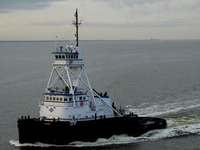 Pictured as: the Rebel (Kirby Corporation) Photo by: Captain Peter