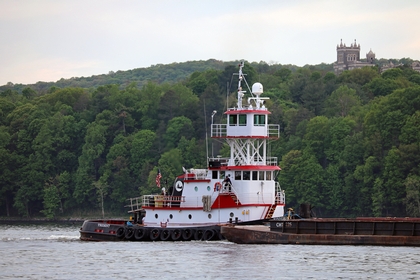 Pictured as: the Trident (Marquette Transportation) Photo by: Jim Roy

Built in 1982, by Brice Shipbuilding Incorporated of Chauvin, Louisiana (hull #3) as the Libra.

In 1999, the tug was acquired by Double Eagle Marine Incorporated of New Iberia, Louisiana. Where she was renamed as the Delta Eagle.

In 2003, she was acquired by the Delta Towing Company of Houma, Louisiana. Where she was renamed as the Delta Trident.

In 2010, the tug was acquired by Greater New York Marine Transportation Incorporated of Syossett, New York. Where she was renamed as the Trident.

In 2010, the tug was acquired by the Marquette Transportation Company of Jefferson, Louisiana. Where she retained her name.

Powered by two, Tier II compliant, Cummins QSK-38 diesel engines. With Twin Disc MG 540 reduction gears, at a ratio of 7:1. Turning two, 79(in) by 76(in), fixed pitch, stainless steel propellers, mounted in kort nozzles. She is a twin screw tug, rated at 2,700 horsepower.

The towing equipment consists of a Smatco 60, double drum, waterfall towing winch. Outfitted with 2000(ft) of 1.75(in) towing wire.