In 1980, the tug was acquired by the Turecamo Coastal and Harbor Towing Corporation of New York, New York. Where she was renamed as the Elizabeth Turecamo.

After acquiring the tug, the Turecamo Coastal and Harbor Towing Corporation removed a number of items including the crane, pilothouse doors, and fuel centrifuge.

In 1994, she was acquired by Robbins Maritime Incorporated of Norfolk, Virginia. Where the tug was renamed as the Bay Titan.

In 2004, the tug was then acquired by Captain Arthur Fournier of the Fournier Towing and Ship Service of Belfast, Maine. Where she was renamed as the Fournier Boys.

The tug primarily performed escort, and assist duties in, and around the Cape Cod Canal. As well as Buzzard's Bay in Massachusetts.

In 2007, she was acquired the Crosby Marine Transportation Company of Golden Meadow, Louisiana. Where the tug was renamed as the Crosby Power.

In 2015, she was phased out of active service and was "laid up" at Port Fourchon, Louisiana. 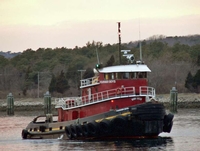 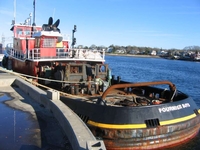 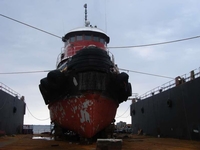 
Back to FOURNIER TOWING AND SHIP SERVICE INCORPORATED