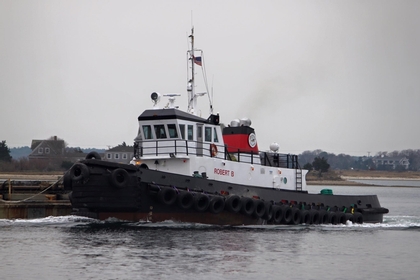 Pictured as: the Robert B. (Robert B. Our Company) Photo by: Nate Lopez

Built in 1985, by the Gulf-Tampa Drydock Company of Tampa, Florida (hull #8301) as the Paz for the Panama Canal Authority of Miami, Florida.

In 1986, the tug was acquired by the St. Philip Coastal Towing Company of Tampa, Florida. Where the tug was renamed as the Tampa.

The company would later be owned by George Steinbrenner. Who also owned the New York Yankees. Under that ownership, the company became the Bay Transportation Company of Tampa Florida.

In 1998, the Bay Transportation Company was acquired by Hvide Marine Incorporated of Fort Lauderdale, Florida. Where the tug retained her name.

In 2000, Hvide Marine Incorporated was acquired by Seabulk Towing Services Incorporated of Fort Lauderdale, Florida. Where the tug retained her name. Where she was re powered, and outfitted with a JonRie 200 line winch, mounted on her bow.

In 2016, the tug was chartered by the Robert B. Our Company of Harwich, Massachusetts. Where she was renamed as the Robert B.

In 2017, she was acquired by the the Robert B. Our Company of Harwich, Massachusetts. Where the tug retained her name.

In 2020, the tug was phased out of active service and was "laid up" at New Bedford, Massachusetts.

In 2021, she was acquired by the Thames Towboat Company of New London, Connecticut.

Originally powered by two, EMD 12-645-E diesel engines. The tug was re powered in 2000, with two, EMD 16-645-E5 turbo diesel engines. Turning two, 99(in) by 105(in), four bladed, fixed pitch, stainless steel propellers, mounted in Kort nozzles. Each nozzle, is fitted with three rudders that work in tandem. The nozzles are also fitted with four flanking rudders. Two mounted forward of each nozzle. She is a twin screw tug, rated 6,000 horsepower.

Pictured as: the Robert B. (Robert B. Our Company Incorporated) Photo by: Nate Lopez

Pictured as: the Robert B. (Robert B. Our Company Incorporated) Photo by: Nate Lopez


Back to HVIDE MARINE INCORPORATED