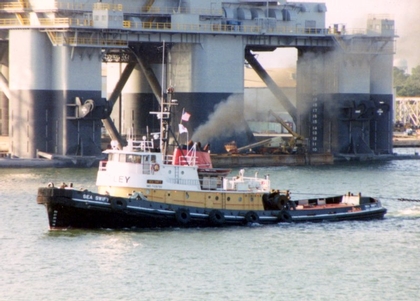 Built in 1968, by McDermott Shipyard of Morgan City, Louisiana (hull #149) as the Sea Swift for Crowley Marine Services Incorporated of San Francisco, California

Designed by Naval Architect Phil Spaulding, the Sea Swift class was the first class of tugs constructed for Crowley Marine Services that were of a twin engine, and twin screw configuration. As well as a pilot house controlled engine room.

In 2010, the tug was acquired by the Kelford Oversea Company of Panama City, Panama. Where the tug was renamed as the B. Billy.

Her electrical service was provided by two, 90kW generator sets. The tug's capacities were 165,000 gallons of fuel.

The towing equipment consisted of a Markey TDSD-36, double-drum, towing winch. Outfitted with 2,200(ft) of 2.25(in) towing wire.