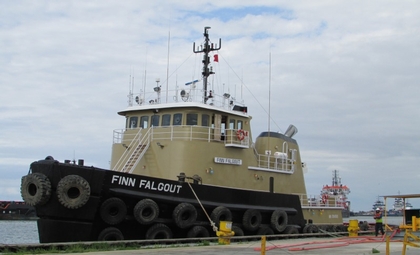 In 1991, the tug was acquired by Crowley Marine Services Incorporated of San Francisco, California. Where she was renamed as the Sea Venture.

In 2011, the tug was acquired by the Falgout Brothers Marine Company. A subsidy of Global Towing Services Incorporated of LaRose, Louisiana. Where she was renamed as the Finn Falgout.

Her electrical service is provided by two Detroit 8V-71 generators. The tug's capacities are 199,727 gallons of fuel oil, 3,350 gallons of lube oil, and 7,950 gallons of potable water.