Built in 1982, by Mid Coast Marine Incorporated of Coos Bay, Oregon (hull #9910) as the T. T. America for the Willamette Tug and Barge Company of Portland, Oregon.

In 1988, the Willamette Tug and Barge company was acquired by by the Brix Maritime Company of Seattle, Washington. Where the tug retained her name.

In 2008, tug was transferred to operations in Boston, Massachusetts. Under the Constellation Maritime Company of Manchester, Massachusetts. Where she was renamed as the Orion.

In 2011, the Constellation Maritime Company was absorbed back into the Foss Maritime Company of Seattle, Washington. Where the tug retained her name. And, remained in Boston, Massachusetts.

The towing equipment consists of an INTERcon SD-150 towing winch, with a Markey capstan, and windlass. As well as an anchor winch, and 375(ft) of 9(in) Sampson stable braid for a stern line.
(Bruce Moyer, Kyle Stubbs) 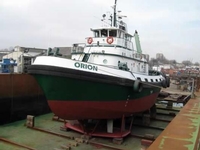