Built in 1967, by the Martinolich Shipbuilding Corporation of Tacoma, Washington (hull #375) as the Pacific Master the Pacific Tow Boat Company of Everett, Washington.

In 1969, Pacific Tow Boat and the Foss Launch and Tug Company of Tacoma, Washington were acquired as subsidiaries of the Dillingham Corporation of Honolulu, Hawaii. Operations of the two companies were united under the Foss name, where she was renamed as the Catherine Foss.

In 1987, the Foss Maritime Company was acquired as an independent subsidiary of Saltchuk Resources Incorporated of Seattle, Washington.

In 2002 the tug was transferred to another Saltchuk subsidiary, the Hawaiian Tug and Barge Company of Honolulu, Hawaii. Where she was renamed as the Kainani.

In 2006, the tug was transferred to Foss Maritime subsidiary Constellation Maritime Company of Manchester, Massachusetts. Where she was renamed as the Lynx.

In 2011, the tug was returned to Foss Maritime of Seattle, Washington. Where the tug retained her name.

In 2012, she was acquired by the Sterling Equipment Company of Quincy, Massachusetts where she retained her name.

In 2021, the tug was acquried an undisclosed interest. 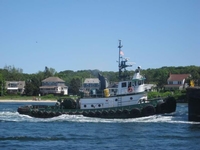