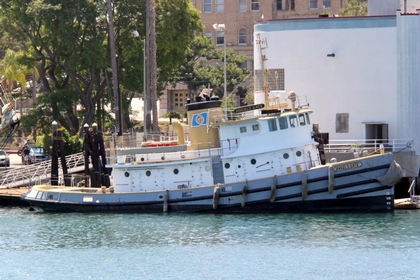 Built in 1944 by Decatur Iron and Steel at Decautur, Alabama as the ST-695 for the United States Army.

The tug was initially stationed in support of the Army Port of Embarkation at Wilmington, California.

In 1947, she was declared surplus and acquired by the City of Los Angeles Harbor Department of Los Angeles, California. Where the tug was renamed as the L A H D No 10.

In 1956, the Los Angeles Harbor Department renamed her as the L A H D Angels Gate , later shortening the name to Angels Gate.

In 1992, the tug was retired and transferred to the Los Angeles Maritime Museum as a fully-functional museum vessel. Where she retained her name.