Built in 1944 by Luders Marine Construction of Stamford, Connecticut as YTB-499 (Chiquito) for the United States Navy.

She was launched on April 18th, 1945, and delivered to the United States Navy in August of 1945. Where she was allocated to Service Force Pacific.

In 1951, she was reactivated as the YTB-499 (Chiquito). Where she was allocated to the 5th Naval District at Norfolk, Virginia.

In 1976, the tug was acquired by the Marine Power and Equipment Company of Seattle, Washington, where she was renamed as Marine Retriever.

In 1990, she was acquired by the Sea Coast Transportation Company of Seattle, Washington. Where the tug was renamed as the Cascade.

In 2005, the tug was acquired by the Island Tug and Barge Company of Seattle, Washington. Where she was renamed as the Island Brave.

In 2006, she was acquired by Alaska-Oregon Offshore Marine Incorporated of North Bend, Oregon. Where the tug was renamed as the Marine Retriever.

In 2016, the tug was acquired by DeForge Maritime Towing of Seattle, Washington. Where she was renamed as the Capt. Cae.

Originally a single screw tug, she was reconfigured in 1979. With two GM diesel engines, and reconfigured as a twin screw tug. She is powered by two, Detroit Diesel 149-T diesel engines, with 6.8:1 reduction gears. Turning two, stainless steel, 87 (in) by 84 (in), propellers. For a rated 2,800 horsepower.

Her electrical service is provided by two, 75kW generator sets. Driven by two GM 4-71 diesel engines. The tug's capacities consist are 44,000 gallons of fuel oil and 3,500 gallons of potable water.

The Towing equipment consists of a Parkersburg towing winch. Outfitted with 2,000(ft) of 2(in) towing wire.
(Kyle Stubbs, NavSource Online) 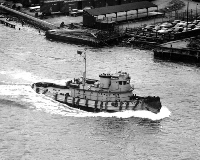 
Back to MARINE POWER AND EQUIPMENT COMPANY