In 1997, the tug was acquired by Martin Midstream Partnership Incorporated of Vidor, Texas. Where she was renamed as the La Force.

In 2010, the tug was outfitted with a Bludworth coupler system. And "married" with the 350(ft) long, 55,000(bbls) tank barge, the M 6000. Which was constructed by Bollinger Marine Fabricators, LLC. of Amelia, Louisiana in 2010 for Martin Midstream Partnership Incorporated of Vidor, Texas. 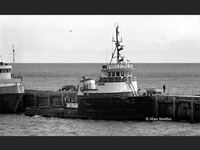 
Back to MARTIN MIDSTREAM PARTNERSHIP INCORORATED