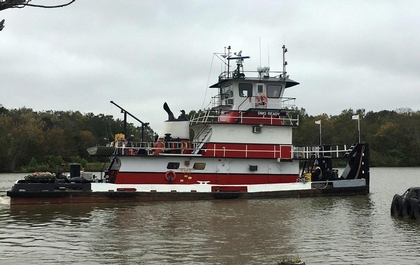 In 1993, the tug was acquired by Hollywood Marine Incorporated of Houston, Texas. Where she was renamed as the Mark L.

In 1999, she was acquired by the Kirby Corporation of Channelview, Texas. Where the tug retained her name.

In 2019, the tug was acquired by IntraTug (the Intracoastal Tug and Barge Company) of Maurice, Louisiana. Where she was renamed as the DMO Ready.

Powered by two, Caterpillar D398E diesel engines. With Caterpillar reduction gears, at a ratio of 3.84:1. Turning two, 72(in) by 56(in), fixed pitch propellers. She is a twin screw, towboat, rated at 1,900 horsepower.

Her electrical service is provided by two, 40kW, John Deere generator sets. The tug's capacities are 20,000 gallons of fuel, 200 gallons of lube oil, 100 gallons of hydraulic oil, and 2,500 gallons of potable water.


Back to INTRA MARINE GROUP