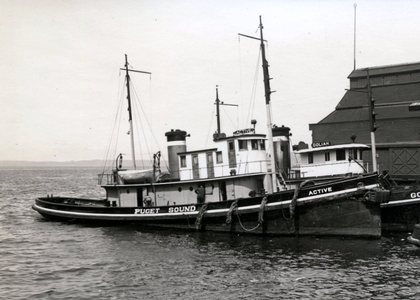 Photo by : James A. Turner (From the personal collection of Kyle Stubbs)

In 1898, she was acquired by the United States Navy, where the tug was commissioned as USS Active.

On 20 April, 1926, the tug sank at her berth at Mare Island Naval Shipyard in Vallejo, California. She was later salvaged, but decommissioned on 16 August, 1926. The tug was then struck from the Naval Register on 24 August, 1929.

In 1930, she was acquired by the Puget Sound Tug and Barge Company of Seattle, Washington. The tug was rebuilt with a 550 hp McIntosh and Seymour diesel engine, and reentered service in 1934, renamed as the Active.

In 1942, the tug was chartered by the United States Navy, where she was designated as the YT-323.

In 1945, she was returned to the Puget Sound Tug and Barge Company of Seattle, Washington. Where she regained the name Active.

In 1963, the tug was scrapped at Seattle, Washington.


Back to PUGET SOUND TUG AND BARGE COMPANY