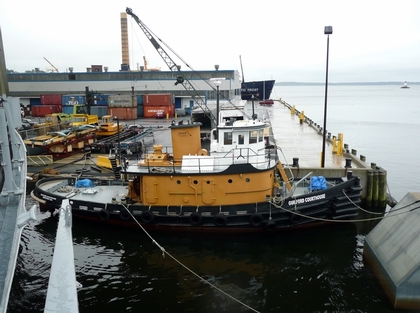 Built in 1956, by American Boiler Works Incorporated of Erie, Pennsylvania (hull #ST 2118) The vessel was completed by Matton Shipyard Incorporated of Cohoes, New York (hull #311) as the ST-2118 for the United States Army.

In 2001, the tug was acquired by Tripp Marine Construction of Westport, Massachusetts. Where she was renamed as the Guilford Courthouse.

In 2017, she was phased out of active service, and was “laid up” at Fall River, Massachusetts.

Originally powered by a single, White Atlas Imperial diesel engine, with a single fixed pitch propeller. She was a single screw tug rated at 600 horsepower.

In 2019, Tripp Marine Constriction repowered the tug with a single Caterpillar diesel engine, with a Twin Disc MG540 reduction gear, at a ratio of 4.10:7. She is a single screw tug, rated at 900 horsepower.


Back to TRIPP MARINE CONSTRUCTION CORPORATION