Built in 1982, by VT Halter Marine Incorporated of New Orleans, Louisiana (hull #1036) as the Ellen S. Bouchard for the Bouchard Transportation Company of Melville, New York.

In 2021, the tug was placed out of active service, and was "laid up" at Staten Island, New York.

In 2021, the unit was acquired by the Centerline Logistics Corporation of Seattle, Washington. Where she retained her name.

Also, a keel cooled, 99kW, generator set. Driven by a Detroit Diesel 8V-71 diesel engine was installed. The third engine drives the electic generator, or the backup hydraulic pump. Any of the three generators can be used to operate the INTERcon coupler system. 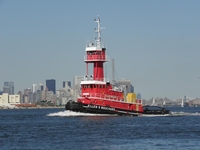 Photo by: Will Van Dorp
Photo by: Joe Becker
Photo by: Tom Turner