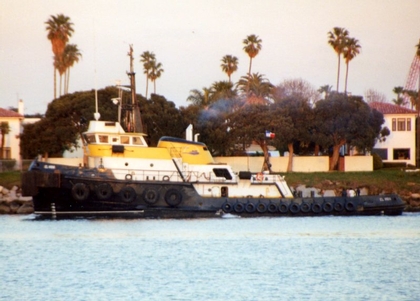 Crowley Marine Services later reflagged two tugs, and two oil barges for a charter with the BP Oil Company of London, England. Operating out of the port of Pedernales, Venezuela. Transporting barged to the port of Point Fortin, Trinidad.

The tugs which were sisterships. The Seminole and the Apache. Where assigned to towing operations with the Crowley Marine Services barges the 450-2, and the 450-4.

All of the vessels where eventually reflagged to the Marshall Islands. The BP Oil Company later sold the Pedernales Oil Field to the Perenco Company of London, Paris in June of 2000. This ended Crowley Marine Service's contract managing marine operations.

However, the two tugs continued exporting the oil for the Perenco Company for several years, until the field was shut down.

In 2007, the tug was acquired by Sound Barge Lines Incorporated of Tacoma, Washington. Where she retained her name.

In 2008, she was acquired by undisclosed foreign interests. Where she was renamed as the El Vigia. However, the tug is no longer listed in documentation. Her current, and or, final disposition is unknown. She was a twin screw tug, rated at 3,000 horsepower.
(Daniel Porter)