In 1985, the tug was acquired by Harvey Gulf International Marine of New Orleans, Louisiana. Where she was renamed as the Harvey Trojan.

In 2014, Harvey Gulf International Marine's towing division was acquired by the Signet Maritime Corporation of Houston, Texas. Where the tug was renamed as the Signet Trojan.

In 2021, she was phased out of active service. And was "laid up" at Port Fourchon, Louisiana.

Her electrical service is provided by two, 100kW generator sets. The towing gear consists of an INTERcon double drum 225 towing winch, outfitted with 4,000(ft) of 2.25(in) towing wire on the primary drum, and 4,000(ft) of 2(in) wire on the secondary drum. 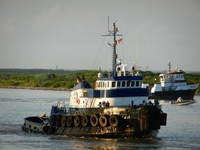