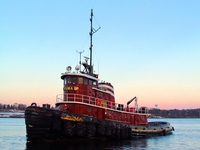 
Back to TURECAMO COASTAL AND HARBOR TOWING CORPORATION