Built in 1963, by Ingalls Iron Works Company of Decatur Alabama (hull #1577) as the Sinclair Great Lakes for the Sinclair Refining Company Incorporated of Wilmington, Delaware.

In July of 1972, the Sinclair Refining Company merged with the Atlantic Richfield Company of Philadelphia, Pennsylvania. Where the tanker was renamed as the Great Lakes.

In 1976, she was acquired by the Eklof Marine Corporation of Staten Island, New York. Where she retained her name.

In 1993, the Eklof Marine Corporation was acquired by K-Sea Transportation Partnership Incorporated of Staten Island, New York. Where she retained her name.

In 2006, she was "laid up" at Philadelphia, Pennsylvania. The tanker's removal from services was a result of OPA '90 regulations prohibiting single skin vessels from transporting petroleum products.

In 2007, the tanker was acquired by Bunker Pro Limited of Panama, Where she was renamed as the Great Balboa. Where she was to be utilized performing ship bunkering services atr the Panama Canal. She departed Philadelphia, Pennsylvania for Panama on October 5th, 2007.

She was powered by two, Fairbanks 10-38D81/8 diesel engines. With Lufkin reduction gears, at a ratio 2.294:1. She was a twin screw tanker, rated at 1,600 horsepower.
(Captain Steve Berhnard, Robert Mattsson) 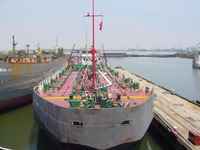 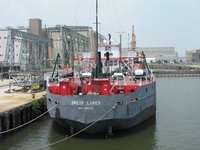