Built in 1975, by Main Iron Works Incorporated of Houma, Louisiana (hull #297) as the Valour for the Interstate Oil Transportation Company of Philadelphia, Pennsylvania.

On January 18th of 2006, she sank forty Miles off the Coast of Wilmington, North Carolina. The tug was declared a constructive total loss, and remains where she sank.

She was a twin screw tug, rated at 6,000 horsepower.
(Captain Eric Takakjian) 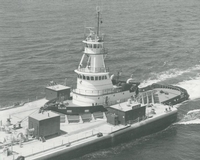