Built in 1972, by the Southern Shipbuilding Company Incorporated of Slidell, Louisiana (hull #94) as the Carole G. Ingram for Ingram Ocean Systems Incorporated of Nashville, Tennessee.

In 1988, the tug was acquired by Maritrans Operating Partnership Incorporated of Tampa, Florida. Where she was renamed as the Constitution.

In 1989, she was put into NORSHIPCO of Nofolk, Virginia. Where a fire occurred in which, much of the superstructure was destroyed.

In 1990, the repaired tug Constitution reentered service. Where she was "married" with the double hulled barge the M-400. Which was constructed in 1981, by Galveston Shipbuilding of Galveston, Texas. 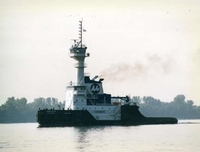