Built in 2012, by Washburn and Doughty of East Boothbay, Maine as the Annabelle Dorothy Moran (hull #104) for the Moran Towing Corporation of New Canaan, Connecticut.

The tug was the third of three nearly identical boats, designed by Jensen Maritime Consultants of Seattle, Washington. Her predecessors, the Capt. Jimmy Moran and the Shiney V. Moran. That were constructed in 2008 and 2009, respectively. By C and G Boatworks Incorporated of Mobile, Alabama.

The Annabelle Dorothy Moran's , design was modified and upgraded by Washburn and Doughty Associated of East Boothbay Harbor, Maine. The upgrades insured that the piping and electrical systems are consistent with the Moran towing Corporation's larger fleet of tugs and barges. The tug's hull features a deep skeg forward for escort work. However, the skeg remained open at the aft end, to allow for better maneuverability. The skeg also provides for a more stable platform when underway, minimizing rolling due to the seaway. Additionally, large machinery removal hatches were constructed in the main deck, and deck house to allow for easy removal of equipment from the engine room.

Her deck equipment consists of an escort hawser winch mounted on the bow, and an "h" bitt. With a hydraulic capstan outfitted on the stern for towing operations and line handling. 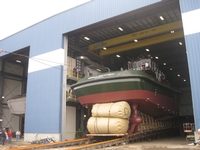 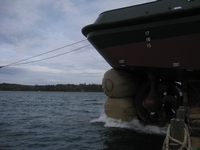 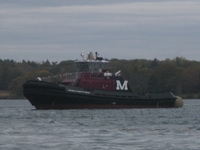 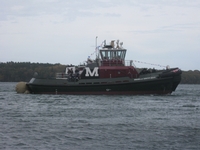