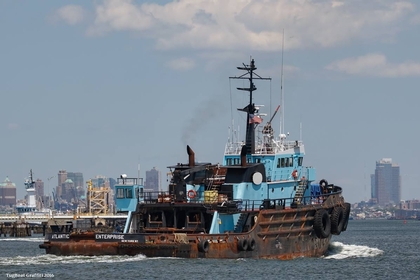 Built in 1976, by Halter Marine Services Incorporated of Moss Point, Mississippi (hull #495) as the Mister Pete for the Jackson Marine Corporation of Houston, Texas.

In 1999, the tug was acquired by Captain Arthur Fournier of the Portland Tugboat and Shipdocking Company of Portland, Maine. Where she was renamed as the Pete.

In 2001, the Portland Tugboat and Shipdocking Company was acquired by McAllister Towing and Transportation of New York, New York. Where the tug retained her name.

In 2007, she was acquired by the K-Sea Transportation Partnership Incorporated of East Brunswick, New Jersey. Where she was renamed as the Barents Sea.

In 2015, the tug was "laid up" at the Kirby Corporation's yard at Mariners Harbor in Staten Island, New York.

In 2016, she was acquired by the DonJon Marine Company of Hillside, New Jersey. Where the tug was renamed as the Atlantic Enterprise. 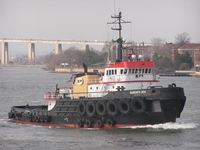 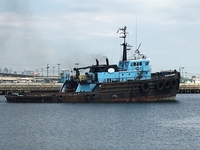