Built in 1960, by the Southern Shipbuilding Corporation of Slidell, Louisiana (hull #YTB-756) as YTB-756 (Pontiac) for the United States Navy.

The date she was placed out of service is unknown. The tug was struck from the Naval Register on April 25th, 1996. On October 4th, 2000 the tug was transferred to the General Services Administration (GSA) for sale or reuse.

In 2000, she was acquired by the McAllister Towing and Transportation Company of New York, New York. Where she was renamed as the Kaleen McAllister.

The Kaleen McAllister was the second conversion of a United States Naval tug by McAllister Towing and Transportation. From a single screw configuration, to a z-drive configuration. However, she was the first conversion to feature a single, variable pitch z-drive.

The Kaleen McAllister was the sixth tractor tug to enter service for the McAllister Towing and Transportation Company.

In 2011, McAllister Towing and Transportation re powered the tug with a single, Tier II compliant, EMD 12-710 G7C diesel engine.

She was outfitted with a Goulds fire pump. Driven by a single 6-71 diesel engine. Rated at 2,000 Gallons Per Minute, tied into two Monitors rated for 1,500 gallons foam capacity.

Her towing gear consists of a JonRie InterTech 200 winch, mounted on the bow. Outfitted with 450(ft) of 7(in) of Neutron Rope. Her original underwater submarine fendering was kept, and refurbished.
(NavSource Online) 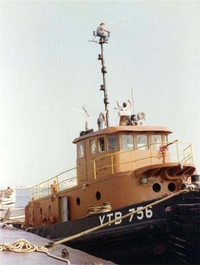