Built in 1966, by the Marinette Marine Corporation of Marinette, Wisconsin (hull #YTB-788) as the YTB-788 (Wapato) for the United States Navy.

A Natick class district harbor tug, her keel was laid down on January 14th, 1966. And, she was launched April 18th, 1966. The tug was delivered to the United States Navy on June 21st, 1966. She was placed into service at the 10th Naval District, San Juan, Puerto Rico.

The date she was removed from service is unknown. She was struck from the Naval Register on April 25th, 1996.

In 2002, the tug was acquired by the McAllister Towing and Transportation Company of New York, New York. Where she was renamed the Barbara McAllister.

In 2005, the tug was chartered to SeaBulk Towing Incorporated of Fort Lauderdale, Florida. Where she was renamed as the Osprey.

In 2006, the tug was returned to the McAllister Towing and Transportation Company of New York, New York. Where she was renamed as the the Timothy McAllister.

She was outfitted with new fire fighting equipment, that included a Goulds pump rated at 2,000 Gallons Per Minute. Feeding two fire monitors, with a 1,500 Gallon Per Minute foam capacity. Driven by a single, 6-71 diesel engine.

The towing gear consists of a JonRie InterTech 200 bow winch. Equipped with 450(ft) of 7(in) Neutron Rope. Her original underwater submarine fendering was kept, and refurbished.
(NavSource Online) 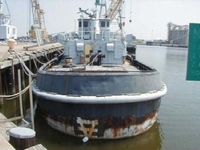 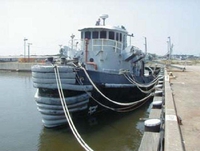