Built in 1971, by the Marinette Marine Corporation of Marinette, Wisconsin (hull #YTB 821) as the YTB-821 (Tontogany) for the United States Navy.

A Natick class large harbor tug. She was the first in the United States Navy to bare the name. Named after a town in Wood County, located in northwestern Ohio named for a local Indian chief.

In 2001, the tug was acquired by the McAllister Towing and Transportation Company of New York, New York. Where she was renamed as the Dorothy McAllister.

Her generators were replaced, as well. The tug's electrical service is provided by two, Tier II compliant, 99kW, John Deere EPA PowerTech generators. The tug's capacities are 20,000 gallons of fuel oil, 710 gallons of lube oil and 1,290 gallons of potable water.

She was outfitted with new fire fighting equipment that consisted of a Goulds pump. Rated at 2,000 Gallons Per Minute. Feeding two fire monitors with a 1,500 Gallon Per Minute foam capacity. Driven by a single 6-71 diesel engine.

The towing gear consists of a JonRie InterTech 200 winch, mounted on the bow. Outfitted with 450(ft) of 7(in) Neutron rope. Her original underwater submarine fendering was kept, and refurbished.
(NavSource Online) 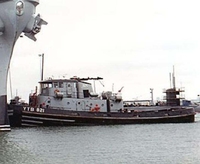