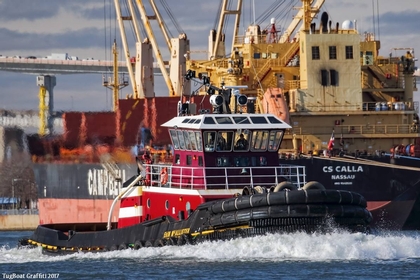 Built in 1996, by Trinity Marine Group. A division of Halter Marine Services of Lockport, Louisiana (hull #1529) as the Z-Two for the Great Lakes Group of Cleveland, Ohio.

The tug was transferred to Tugz International of Fort Lauderdale, Florida. The company was established as subsidy of the Great Lakes Group of Cleveland, Ohio.

In 2004, the tug was chartered by the McAllister Towing and Transportation Company of New York, New York. Where she was renamed as the Erin McAllister.

Pictured as: the Erin McAllister (McAllister Towing and Transportation) Photo by: Randall Farhy