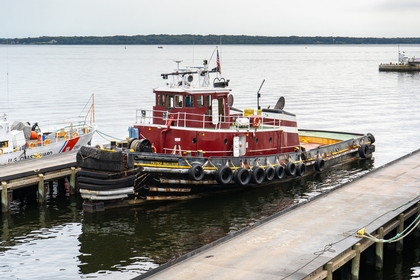 Built in 1974, by Marinette Marine Corporation of Marinette, Wisconsin (hull #YTB 825) as the YTB-825 (Wathena) for the United States Navy.

A Natick class district harbor tug. Her keel was laid down on April 4th, 1973, the tug was launched on September 6th, 1973. And, delivered to the United States Navy on October 16th, 1973. The tug was placed into service at the 5th Naval District at the Naval Base at Norfolk, Virginia.

It is unknown the date she was placed out of service. The tug was struck from the Naval Register on October 28th, 1997. On May 17th, 2000 the tug was transferred to the General Services Administration (GSA) for sale and reuse.

In 2000, the tug was acquired by Captain Arthur Fournier of the Portland Tugboat and Shipdocking Company of Portland, Maine. Where she was renamed as the Fournier Spirit.

Captain Fournier oversaw the repowering, and reconfiguration of the tug. The work was performed along a tidal bulkhead in Portland, Maine. She was never dry docked during the process. 35(ft) of the tug's original stern was removed, and a new square stern was fabricated, and added. All of the steel work on the tug was performed at low water. When the tide rose, the work crew moved on to another project topside, until the tide dropped again

In 2001, the Portland Tugboat and Shipdocking Company was acquired by the McAllister Towing and Transportation Company of New York, New York. Where the tug was renamed as the Patrick McAllister.

The conversion work to the tug, including restoration of her original, underwater submarine fendering. Was completed at the McAllister Towing and Transportation company's yard at Mariner's Harbor in Staten Island, New York.

The Patrick McAllister was the second tractor tug to enter service for McAllister Towing and Transportation.

Her towing equipment was modified as well. With the installation of a JonRie InterTech 200 winch, mounted on her bow. Equipped with 450(ft) of 7(in) Neutron Rope.
(NavSource Online, Captain Patrick Fournier)