Built in 1970, by Peterson Builders Incorporated of Sturgeon Bay, Wisconsin (hull #YTB-811) as the YTB-811 (Houma) for the United States Navy.

A Natick class district harbor tug. Her keel was laid down on December 1st, 1970, and she was launched on May 8th, 1971. The tug was delivered to the United States Navy September 23rd, 1971. She was allocated to Naval Base Roosevelt Roads, San Juan Puerto Rico.

The date she was taken out of service is unknown. She was struck from the Naval Register on November 9th, 1999. And, transferred to the Defense Re utilization and Marketing Service (DRMS) for sale or reuse.

In 2003, the tug was acquired by the McAllister Towing and Transportation Company of New York, New York. Where she was renamed as the Stacy McAllister.

She was outfitted with new fire fighting equipment that included a Goulds pump rated at 2,000 Gallons Per Minute. Feeding two fire monitors with a 1,500 Gallon Per Minute foam capacity. Driven by a 6-71 diesel engine.

She was also outfitted with a JonRie InterTech 200 series bow winch. Equipped with 450(ft) of 7(in) Neutron Rope. Her original underwater submarine fendering was kept, and refurbished.
(NavSource Online) 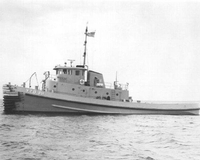 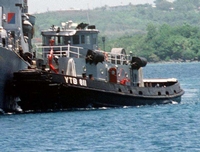 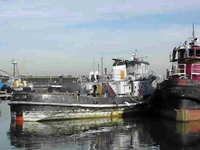 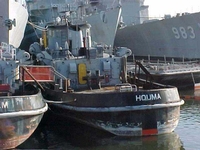