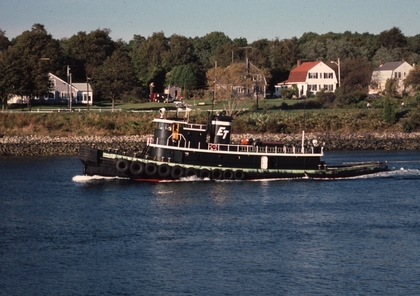 Pictured as: the Saturn (Eastern Towboat) Photo by: Paul Kinnaly

In 1949, she underwent a major refit at Speddin Shipyard in Baltimore, Maryland. Her steam engines, and engine room equipment were replaced with engines from two salvaged military Landing Ship Tanks (LSTs).

In 1952, the tug was acquired by the Independent Pier Company of Philadelphia, Pennsylvania. Where the tug was renamed as the Saturn.

In 1972, the tug sank. Although, she was later raised, and repaired.

In 1983, the Independent Pier Company was acquired by the McAllister Brothers Towing Company of New York, New York. Where she was renamed as the Muriel McAllister.

In 1989, the tug was acquired by the Eastern Towboat Company of Boston, Massacusetts. Where she was renamed as the Saturn.

In 1997, the tug was acquired by an individual or company called Testa. She was then acquired by MRP Site Development of Lynn, Massachusetts. Where the tug retained her name.

The tug was eventually acquired by another individual by the name of Melissa D. Terry. Where she retained her name.

She was later acquired by and individual named Jon B. Johansen of Winterport, Maine. Where the tug retained her name.

The tug was single screw, rated at 525 horsepower.


Back to INDEPENDENT PIER COMPANY