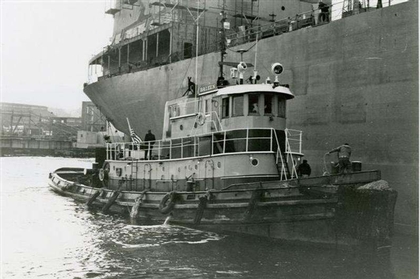 Built in 1922, by the Mantowic Shipbuilding Corporation of Manitowoc, Wisconsin (hull # 206) as the John E. Meyer for the Barnett and Record Company of Duluth, Minnesota.

In 1940, the tug was acquired by the Pringle Barge Lines Incorporated of Cleveland, Ohio. Where she was renamed as the Jesse James.

In 1940, Pringle Barge Lines Incorporated was acquired by the Oglebay Norton Company of Cleveland, Ohio. Where the tug retained her name.

In 1967, the tug was acquired by the Nickerson Tug and Transit Company of Tampa, Florida. Where she retained her name.

In 1969, following a refit, the Nickerson Tug and Transit Company renamed the tug as the Baleen.

On October 29th 1979, the Baleen departed New York, New York bound for Boston, Massachusetts. She was towing a barge loaded with two and a half million gallons of home heating oil. On Thursday October 30th 1979, a fire broke out in the tug's engine room around 1500 when she was approximately two miles off Manomet Point in Cape Cod Bay.

All efforts that where made by the crew to extinguish the fire were unsuccessful. The Captain made a distress call before the tug's crew abandoned the tug. The six men from the tug and the two crewmen on the barge safely evacuated, not one crew member was injured in the incident.

Originally, the tug was outfitted with a triple expansion steam engine the produced 750 horsepower and was considered a state of the art vessel at the time she was equipped with a steam powered towing winch on the stern.

In the winter of 1967, she was re powered with a new 3,000 horsepower diesel engine at the Hendries Shipyard in Tampa, Florida. This included the installation of a new towing winch. Her deck house and stack where rebuilt as well.
(Matt Surette, Captain Eric Takakjian) 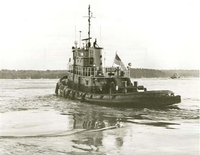 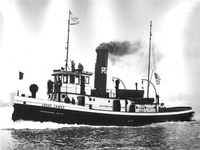 
Back to BARNETT RECORD COMPANY INCORPORATED