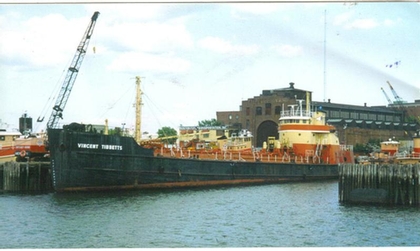 Built in 1944, by East Coast Shipyards Incorporated of Bayonne, New Jersey (hull #15) as the AOG-33 (Ochlockonee) for the United States Navy.

T-1 tankers were small product carriers, designed to carry gasoline. Almost all of them went to either the United States Navy, as AOGs, or to Britain, for service in a similar role. Many of those under construction at the end of the war were sold immediately.

The tanker was launched on November 19th 1944. She was delivered to the United States Navy on December 18th, 1944. Where she was allocated to the Asiatic-Pacific Theater.

In 1946, the vessel was decommissioned at San Pedro, California. And, struck from the Naval Register on November 7th, 1946.

In 1947, she was acquired by the Tide Water Associated Oil Company of Wilmington, Delaware. Where the vessel was renamed as the Tycol.

In 1949, the Tide Water Associated Oil Company had the tanker lengthened.

In 1958, she was acquired by the Getty Petroleum Company Incorporated of New York, New York. Where the vessel was renamed as the Newark Getty.

In 1959, the vessel was acquired by the Poling Brothers Transportation Company of New York, New York. Where she was renamed as the Poling Bros. No. 10.

In 1967, she was acquired by the Texaco Marine Company Incorporated of Beaumont, Texas. Where she was renamed as Texaco No. 10.

In 1969, the vessel was acquired by Poling Brothers Transportation Company of New York, New York. Where she was renamed Poling Bros. No. 10.

On September 5th 2002, she was reefed off New Jersey. She was powered by a single Fairbanks-Morse 37E16 diesel engine. Turning a single, fixed pitch propeller. She was a single screw tanker rated at 800 horsepower.
(NavSource Online) 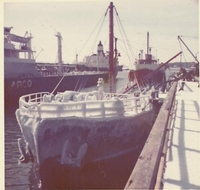